Walking With, Into, and Through Difference - Part 1

It is said sometimes that a rabbi will speak or teach the same thing over and over. So it's great to realize when you learn something knew, and not bad when it's from yourself.

Last Shabbat I said something in my D'var Torah, reflecting on Elie Wiesel -- that getting the details right is important, even when you're talking about unjust suffering. I realized this week how much I gravitate toward stories of those who are in pain nonetheless reaching out for commonality with those on another side.  Like the family of Rabbi Miki Mark in Israel, who was murdered in an act of Palestinian terror, who told those calling for revenge on Arabs that it was Arab Palestinians who were their first responders. Or the Sunday church service last week in Dallas, where one of the murdered policemen was known, and the community talked about the need to hear African-Americans' pain.

It dawned on me that when I do this, I ought to know more about the "other" when I praise them in the name of my own ideals.

So one thing I decided to do was to make some time, as soon as possible, to step into difference in my own world. I don't live a life that is tremendously diverse, but the place I have it is religion. So I thought to start there, by getting with some people I know well of different faiths, clergy people, to talk about differences.  And together to go to some other religious places in town that I don't know well, to bring a gift and ask questions and see what I can answer for those who want to know more about Jews, Judaism, or me.

We can't rush through difference.  We have to notice it and take it seriously.  I'm part way through this first, quick thing, a social-media stunt to jumpstart some talk and connections and action in town.  I have more places to visit today and in the next few days.  I'll pull together a short video and some better thoughts about what I am learning after I finish.  In the meantime, some photos...

We started at the Hollis Congregational Church.  That's me with Rev. Tanya Stormo Rasmussen, the pastor there, and Rev. Sally Newhall of Nashua Presbyterian Church on the left. 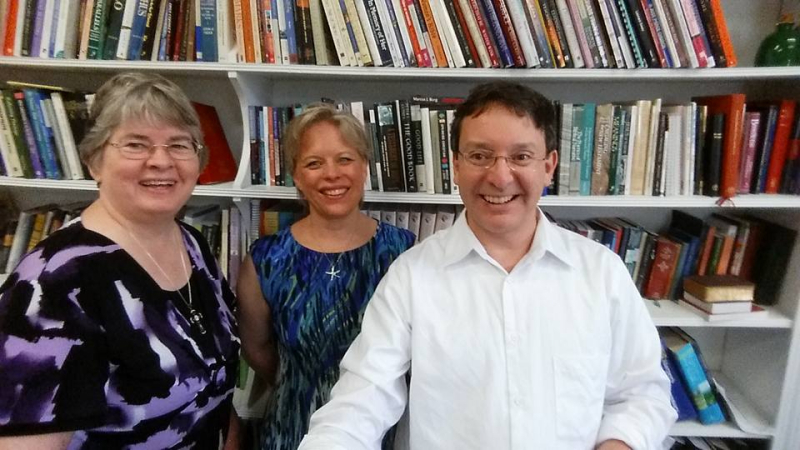 I gave Rev. Rasmussen a klaf, the parchment that goes in a mezuza on the doorpost, partly because it says "Adonai is One."

Then we went to the Nashua Baptist Church.  It's two minutes from my home, I drive by all the time, and I have never been in there.  It's Southern Baptist, in New Englahd!  The pastor wasn't there but we sat for a while with the church secretary: 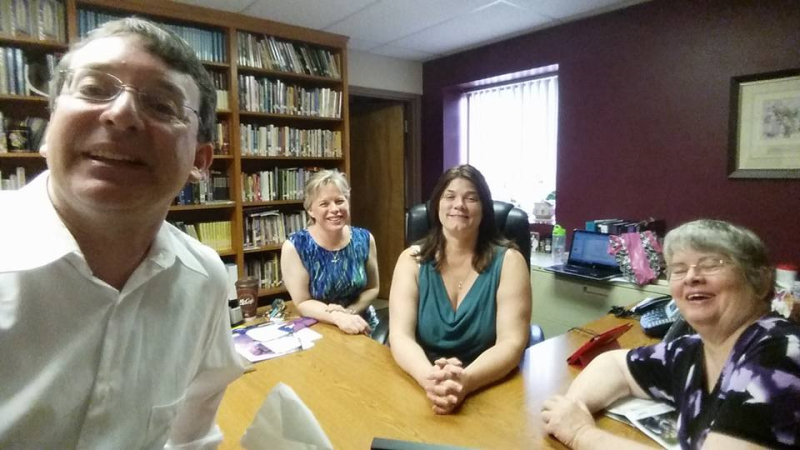 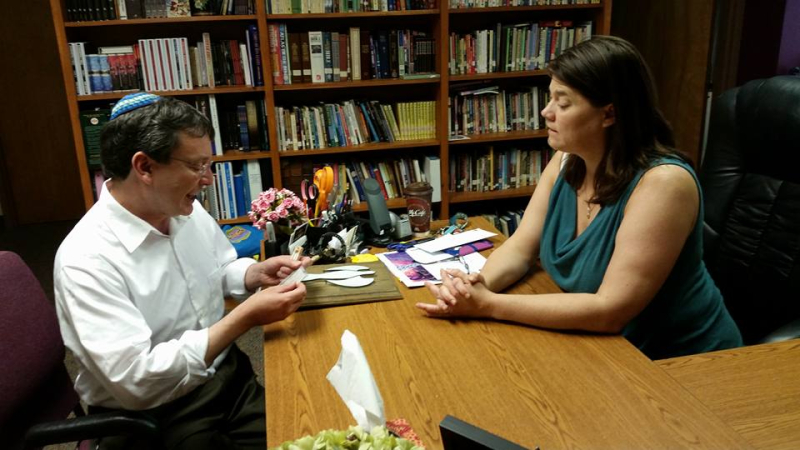 We knocked on some other doors too, didn't have any more successful deliveries but sat for a bit at Bonhoeffer's Cafe, with Rev. Matthew Tingler of Christ the King Lutheran Church and Zev Sernik, regional president of United Synagogue Youth.  I don't know why it's upside-down, I'll work on that: 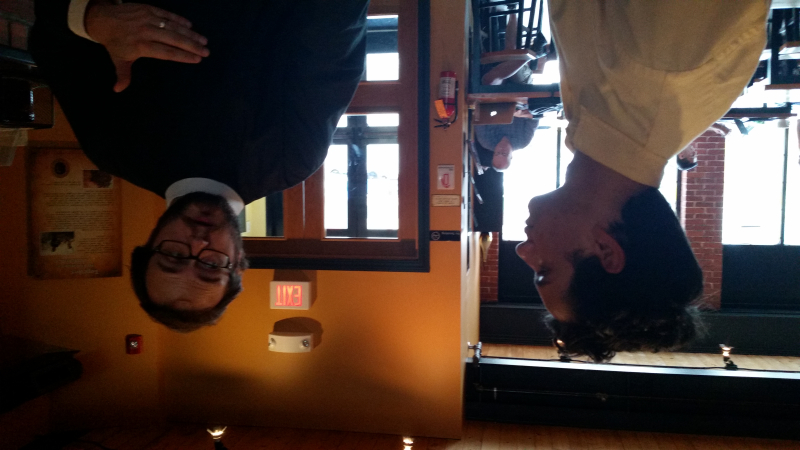 Rabbi Jon,
I found this piece very interesting. I have, in my own life tried to break the insular bonds and share with others of different faiths, both by going to their faith homes and inviting them to mine and most importantly, to listen...by explaining what I do and think and asking what they do and think. I believe that it has enriched my life and my family's lives enormously.
One small issue....though it is important to note differences, it is, in my estimation much more important, to look more deeply for the similarities. I believe that therein lies a significant and unifying element which has become a problem in our society.
Well, thanks for your outreach and good luck with it. (I am Gay Porter (Lisa and Todd's mother)