Assignment: Choose an artifact that to you represents America, American society, or American culture. Feel free to share an image and/or explanation in the comments here or in your own post. 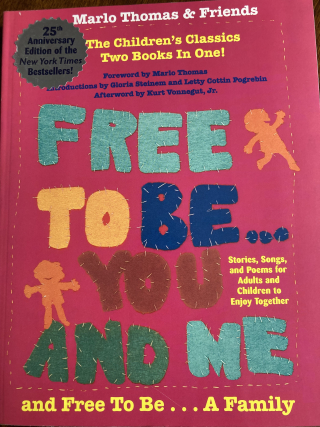 When I began co-teaching the course, the artifact I chose was the book and album “Free to Be You and Me.” It’s a 1972 project created by Marlo Thomas. For the younger people here, that’s Rachel’s mother from “Friends”, and this project is one reason why that casting is so amazing in a counter-to-type way (read on).

“Free to Be You and Me” was a series of songs and stories for kids aimed at breaking down gender stereotypes. What a boy and a girl has to be like, want to be when they grow up, etc.

I chose this as my artifact for three reasons.

This last point in particular is what I want to interrogate through the course of this year. That assumption, and whatever knowledge I need to gain and reflect on in order to assess how far it is.