Here are my sermons from Rosh Hashanah 5783:

First day:
Help Me Talk About What I've Been Through and Who I Am

Second day:
Right-ology: How to Be Right Better in the New Year

Wishing everyone a Shana Tova Umetukah, a good and sweet new year!

Posted June 27, 2022 on Facebook, so not quite as tight as what I usually write. 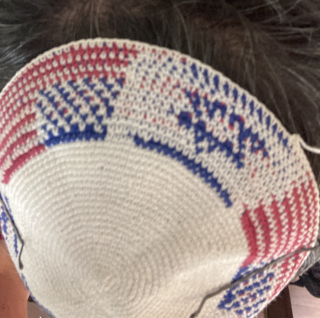 This is what the top of my head looks like today and through next Monday at least, July 4. No matter what’s happened recently, I am celebrating our independence, freedom, and democracy, and wearing that above me as a kippah, the flag of my country and the star of my faith. I am proud to be American, and to be an American leader in my American community.
1. What bothers me about today’s Supreme Court decision about the high school teacher/coach leading a Christian prayer in the middle of the field after a game is not the individual teacher or the place. Viewed in itself, of course he doesn’t speak for “the state” which has repeatedly tried to disavow this one particular thing.
What bothers me is the majority’s consistent disregard of the overall context. It’s not the individual situation; it’s the pattern of one particular religious expression seeking to shape our laws overall (and our culture but I think that's not the constitutional issue). It’s their right to do so. But the majority says that the First Amendment only extends to guaranteeing the tolerance that would have been understood as “non-establishment of religion” by the Framers. Many (not all) of the Framers surely did feel that as long as there is some space for religious minorities and dissenters and atheists, and that the government is not paying the expenses of a church directly, then the First Amendment is satisfied.
That’s what the Supreme Court majority says is the standard today. I know that non-originalist approaches are problematic, but the originalist approach is too. We’ve come a long way and I believe our Constitution has helped that. Not so much if this is what can happen place by place.
2. I have thought about this for a long time, and now I am deciding for sure and declaring: I will no longer accept invitations to give prayers at government meetings. Not if it’s my friend in office, not if it’s the president of the United States. I just can’t, not consistent with what I’ve written here.
I will participate as a citizen and share my motivations when they are religious. I will identify as a leader, freely exercising my right to speak and teach and testify at hearing about what my faith says relating to public matters. I’ll participate in public and governmental things that are about religious diversity or cultural diversity. But no more benedictions and opening prayers, no more invoking the divine in an official capacity before a government body meets. My fellow citizens who are not religious or not religious in a style parallel to mine deserve their forums to respect them.
Yes, I realize no one ever thinks that my prayer means the state is endorsing Judaism. But when I say a prayer, I’m as much a ”clergy person” or a “religious representative” as a Jew specifically, and it’s all about a role for religion in government overall that I cannot endorse. So I have to follow my principle and set an example. If that means ceding the “pulpit” only to those who don’t have that principle – well overall they already have taken it.
The words of a proud American patriot.

Tov! Chapters 19 and 20 -- Classic Themes of the Trolley Problem, Lying, and Friendship

Chapter 19: How to Learn From the Trolley Problem

On “The Good Place” Michael turns the famous trolley problem into another form of torture for Chidi, while Jason says being mean to someone who is being nice to you is bad but he can’t put his finger on why. On the podcast, Geoff Mitelman (rabbi/science guy!) and I discuss how philosophical models torture us and teach us, and how understanding our brains with the insights of neuroscience can help us become better at ethical decisions. Click here to listen and for show notes.

Chapter 20: Because Friends — And Lying Reframed

On “The Good Place”, Janet’s glitching prompts Michael and Janet to talk about the lies at the beginning of their relationship and now, and Michael realizes that they are friends. On the podcast, Myra and Ben and I overinterpret paper clips. Then we look for a broader view of lying and truth-telling, and discuss how friendship relates to speaking in error and learning truth. Click here to listen and for show notes.